Mapped to instruments, enhanced with lyrics

From the maker of the current all-time most popular beat-map Believer, Rustic, we have what I consider to be an under recognized gem of a beat-map.
Like Believer, Uprising is a simple map, with little variation – usually turning a note sideways or switching hands here and there.  But simplicity isn’t a bad thing, as proven by Believer, and Uprising does it even better.

Uprising’s expert map boasts the best readability of a fun beat-map that I have ever personally encountered, which to me is one of the biggest positives a custom song can have.  It also consistently holds a fun flow, and has no patterns, barriers, or bombs that bothered me.  When I played this map for the first time, I openly praised the maker (unaware it was Rustic at the time), literally jumping in post-match excitement.  This map gave me a taste of that feeling from the early days of the game, when you first complete one of the original soundtracks – when I initially fell in love with the game.

It is not an exaggeration to say this beat-map made me fall in love with the song.

The only potential negative I can come up with for this beat-map is a side effect of the simplicity, in that there’s little innovation and no major variance, which can harm replay-ability.  However, calling this a negative is a stretch, and is very subjective.  There are very few maps I struggle to find negatives on (to include the OST!) and this map has accomplished that. 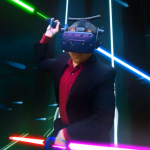