Every day, I keep a dream journal.
Some people say that over time it might start making dreams feel like real life
and that’s dangerous…but I haven’t felt that way.
More than that, people say it’s a good way to improve one’s mental health.
But it seems like that’s true of all routines.
For me, it’s just fun. Reading back on it, it’s like I have more memories.
Dreams and memories are about the same thing once they’re in the past, so it doesn’t feel far from the truth to say they really happened to you.
But it’s actually really hard to write a dream journal…they slip out of your memory so easily.
The details slip away from you as you write.
You have to record them as fast as possible.
Apparently professional interviewers don’t use words at all.
They just use a personal system of simple symbols to record everything.
But I can’t do that sort of thing….so I frequently miss days. It’s difficult to be accurate, too.
…in writing my journals, I’ve lately had a disproportionate number of bad dreams. And they feel so real.
Death is a given, and often I’ll suffer for a long time without dying.
I’ll immediately wake up after death, but just before it feels like reality.
Pain, suffering…nothing but that. Recently sleep itself has become scary, no, terrifying.
Since I’ll feel the pain of death every time I sleep…I think it’s a little impressive to keep writing dream journals even through that.
…maybe the way all that pain resets when I wake up
is the real motivation for my journals.
Since I might really die someday.
And I can only think of one reason why I’ve been having all these bad dreams. That drug.

Marenol.
An antidepressant I got hold of myself instead of being prescribed.
I’m, well, depressed. I took the drugs I was prescribed at first, but they didn’t do anything.
I’ve done counseling, too, but I never had any confidence in it.
Unsurprisingly, I soon stopped medicating, and soon I lost the will to go outside.
Even leaving my room became a challenge. I stopped eating, started collapsing and vomiting.
Even though there was nothing to vomit up…heh.
For better or for worse, in the middle of all that, I found an antidepressant on the internet.
I wasn’t actually looking for one…
Instead, while I was looking for suicide methods without any intention of actually going through with it, it showed up in some automatic interstitial.
(Is it really a good thing to stop people who want to die?)
Its main effects: powerful antidepressant properties, mood enhancement, healing depression itself, nutritional supplementation, with a very long tail of effectiveness…nothing short of perfect.
But I was more interested in the side effect. “Dreams so bad they approach death.”
I was dubious of whether they were actually that bad,
But having “recovery” as a main effect and “death” as a side effect is sort of win-win for someone suicidal.
And dream journals had almost made bad dreams a little fun.
And there are a lot of drugs with bad dreams as a side effect.
It’s hard to tell if the drugs actually cause them or they were happening anyway…
So apparently it’s really not that big a deal.
I really didn’t think it would be that bad…in retrospect, I was overconfident.
I just took a bunch without paying too much attention to the instructions.
I figured, hey, I’ve OD’d before.

Thinking back, since it was on a suicide site…it must have been intended for “that”.
Something that only people prepared for “that” would use.
At the very least, it was all true. Dreams like living hell. I die over and over again.
The pain, no different from real life.
I knew that suicide by overdose was painful, but…it was stupid to attempt something like this.
Oh god, I want to die. Or…am I already dying? Christ, please.
I know I said I wanted to die, but not this terribly.
The worst part it…when I’m awake, I feel fine.
I’m almost sickeningly happy. It’s a little amazing that it’s so effective I’m able to write this.
But…it’s all a trap. It’s like the main effect is death, and the side effect is wanting to live.
It wouldn’t be that bad if it was just dying in a dream, but…
It all hurts just as much as if it was real life.
“Dreams so bad they approach death”…I thought it was talking about dying in the dream.
But I’ve heard of people dying because their dreams felt so real their brains went into shock.
So maybe it was talking about death in the real world. If so…I know I’ll die that way.
It feels so real, I can’t tell how I’m still alive.
Just make it either a dream or real, please…it’s not like it makes a difference.
The pain of being impaled by a lance, being crushed by the ceiling, of starving for oxygen as I drown…
Even though it’s just a dream, it’s all real to me.
There’s nothing I can do but wait until the effects run out.
Even though it’s been days since I took it, it’s still in my system.
I have no idea how long it lasts…and until then, there’s nothing I can do but die, over and over again.
But I have no other options…a punishment I inflicted on myself.
If I die, it’ll be with no external injuries…no one will be able to tell what killed me.
That’s why I’m writing all this here…both my life and my dreams. 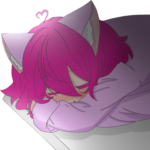