It’s finally here!
I have finally decided to join the trend and make a modchart to acloudyskye.
Honestly, their music is just something else, it’s really the perfect backing for making visual maps.

This project took way too long. What initially was meant to take less than a month has ended up extending over three or four months. But boy, did that extra time pay off. This is by far the best map I have ever made.
Video playthrough:

This is the most technically challenging map I have ever made. All the environments are animated and were generated 100% with code. The environments that use Blender only make use of its parenting system and are generated with python scripts.

I also wrote some basic lore for the map. If you want to read the lore, it is included in the script on my GitHub. Check it out here: https://github.com/Aureliona1/Noodle-Maps/blob/main/ReMapper/2.1.0/Storyteller/script.ts 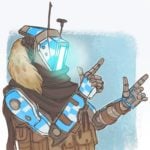 Have A Question & For whatever reason you think I'm Qualified, Feel free to reach out to me on Discord! [ Phøenix#5713 ]