“Anarchy” is from the tenth studio album, Symbols (1997,) by the German industrial band KMFDM. Written by band members En Esch, Sascha Konietzko, Günter Schulz, and with lyrics by Tim Skold, this song is one of the songs which has become an icon of Industrial rock. It was also featured on the soundtrack to the 1998 video game Test Drive 5.

KMFDM (originally short for Kein Mehrheit Für Die Mitled (rough German translation: “no pity for the majority,”)) was founded in 1984. It is considered one of the pioneering bands to bring Industrial music to the mainstream audiences, along with Ministry, Nine Inch Nails, and Skinny Puppy. KMFDM has released 22 albums at the time of the release of this map, and, despite several break-ups and reforming, still play and tour today.

The colors of the map are inspired by those that are used on the cover of Symbols, designed by commercial artist Adian “Brute!” Hughes. Hughes is the responsible for the art on almost all of KMFDM’s albums and singles. 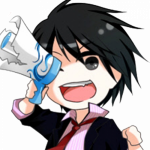 Just another guy creating custom maps on Beatsaber. As you can tell from my charts I'm a big fan of RWBY. Still constantly improving my mapping skills and learning how to make better maps for everyone! ^^