The Quest is amazing for Beat Saber, however, one thing that it doesn’t do well at the moment is record playthroughs with everything perfectly in sync out of the box.

It’s available for Mac, Windows and Linux. One nice thing about it is that it doesn’t have to “re-encode” a video (resaving each frame of the video), it remuxes it (simply performs the shift instantly to the video file). 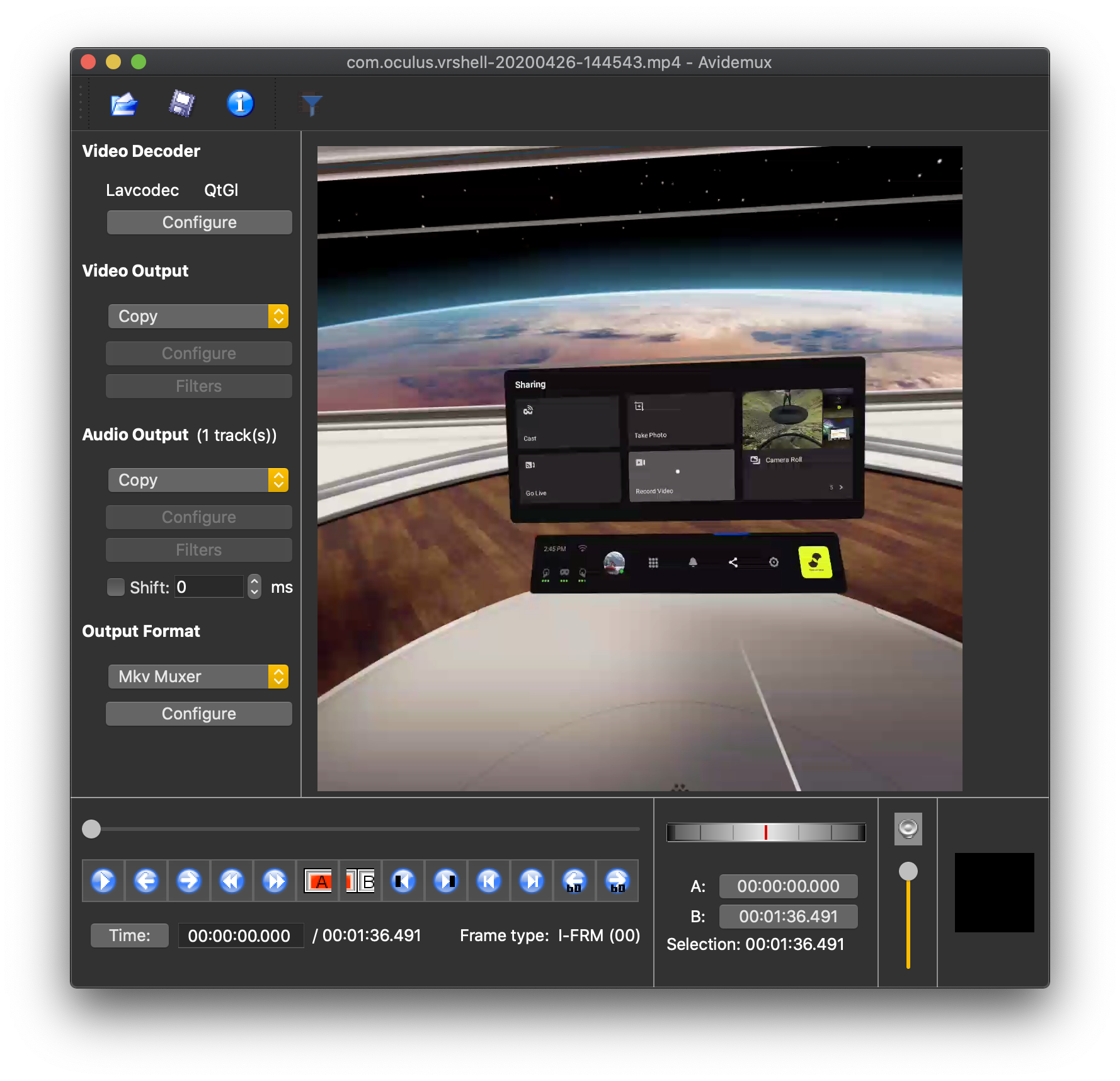 To use, plug in your Quest. Copy the video file to any folder on your computer (the location screen recordings get saved to is Oculus / VideoShots /

Shifting The Audio To Be In Sync

Once you’ve copied your video to your PC or Mac, simply drag your video file onto the Avidmux window (or click on “open” then select your video) 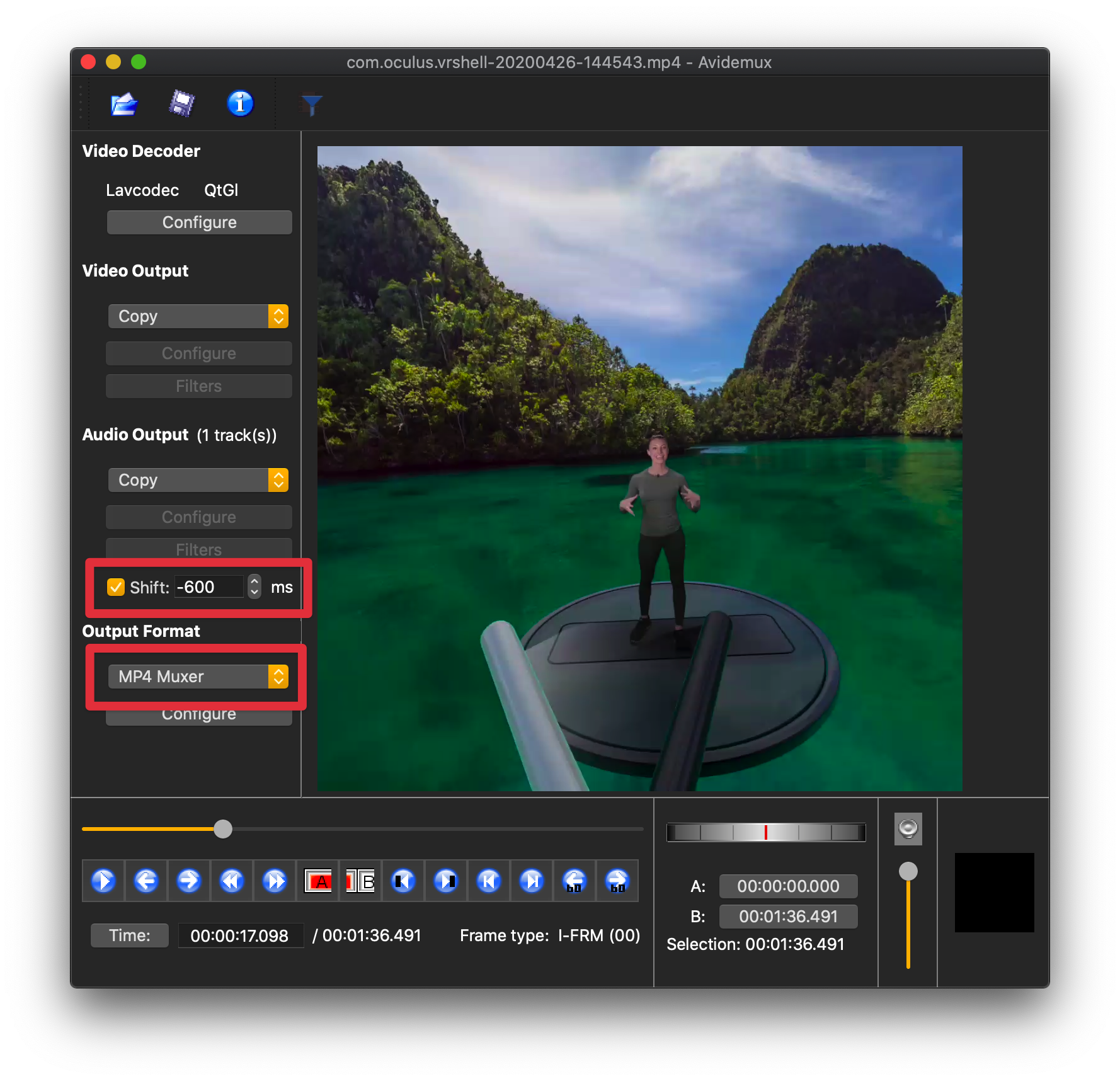 For me, the audio almost always needs to be shifted -600 ms and it’s right on sync. You can play the video to make sure it’s in sync in Avidemux before saving it. Set the video and audio output to “copy” like the screenshot above so you don’t need to reencode the video. You can change the Output format to MP4 to keep the same format it was in.

When you are happy, you can keep the output format to stay as an mp4 and click save. You now have an in sync playthrough!

Other Issues: The start is on sync when I shift it, but it drifts off sync later in the video

The variable framerate that the Quest records can sometimes cause drifting to occur with the audio. To fix it, you will will need to re-encode the video to a fixed framerate. To do this, change copy to mpeg4 and click on Video / Filters 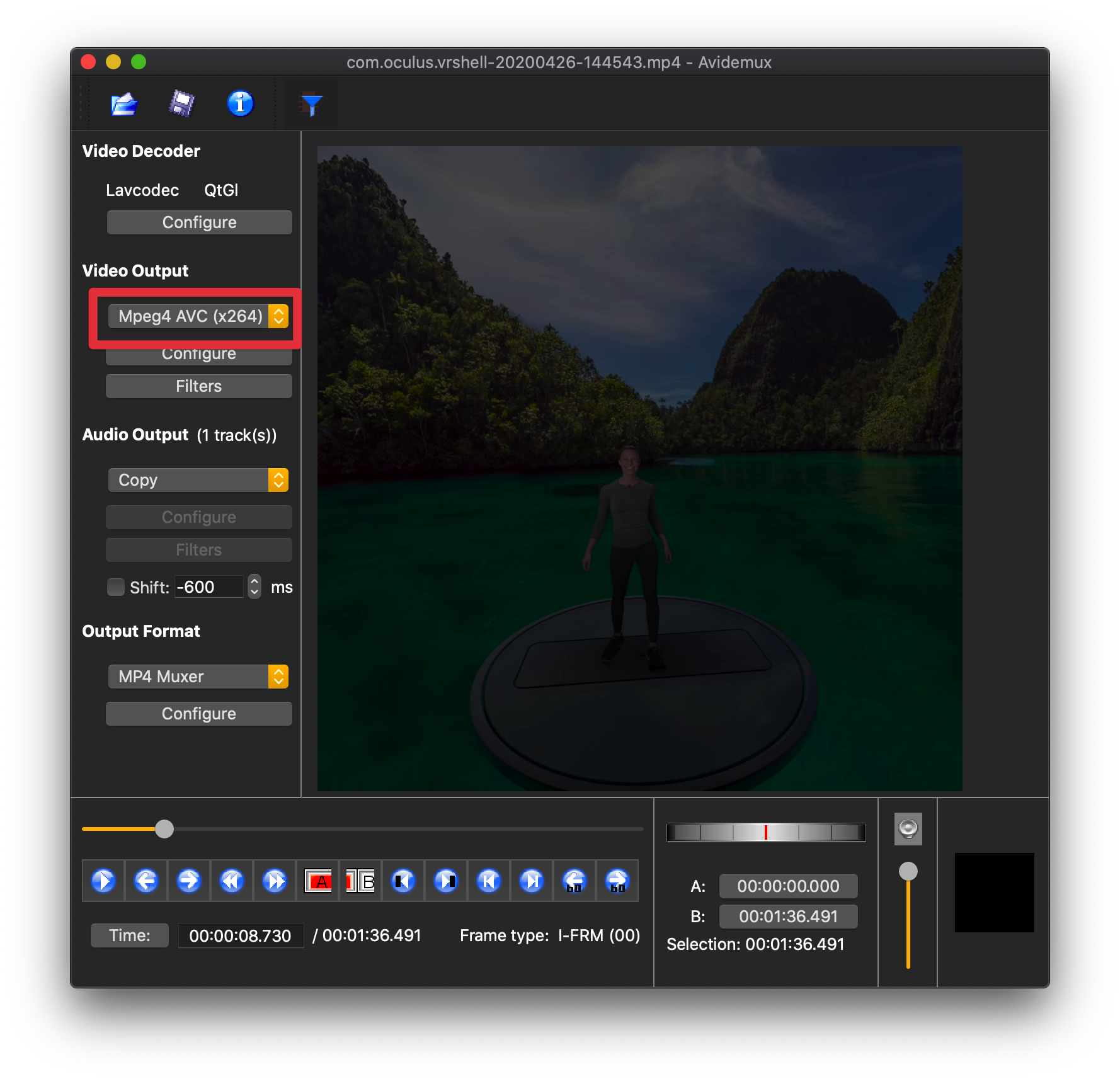 You’ll then select the “transform” category and select the “Resample FPS” option (not the “Change FPS one. That one changes the framerate without keeping the proper time) 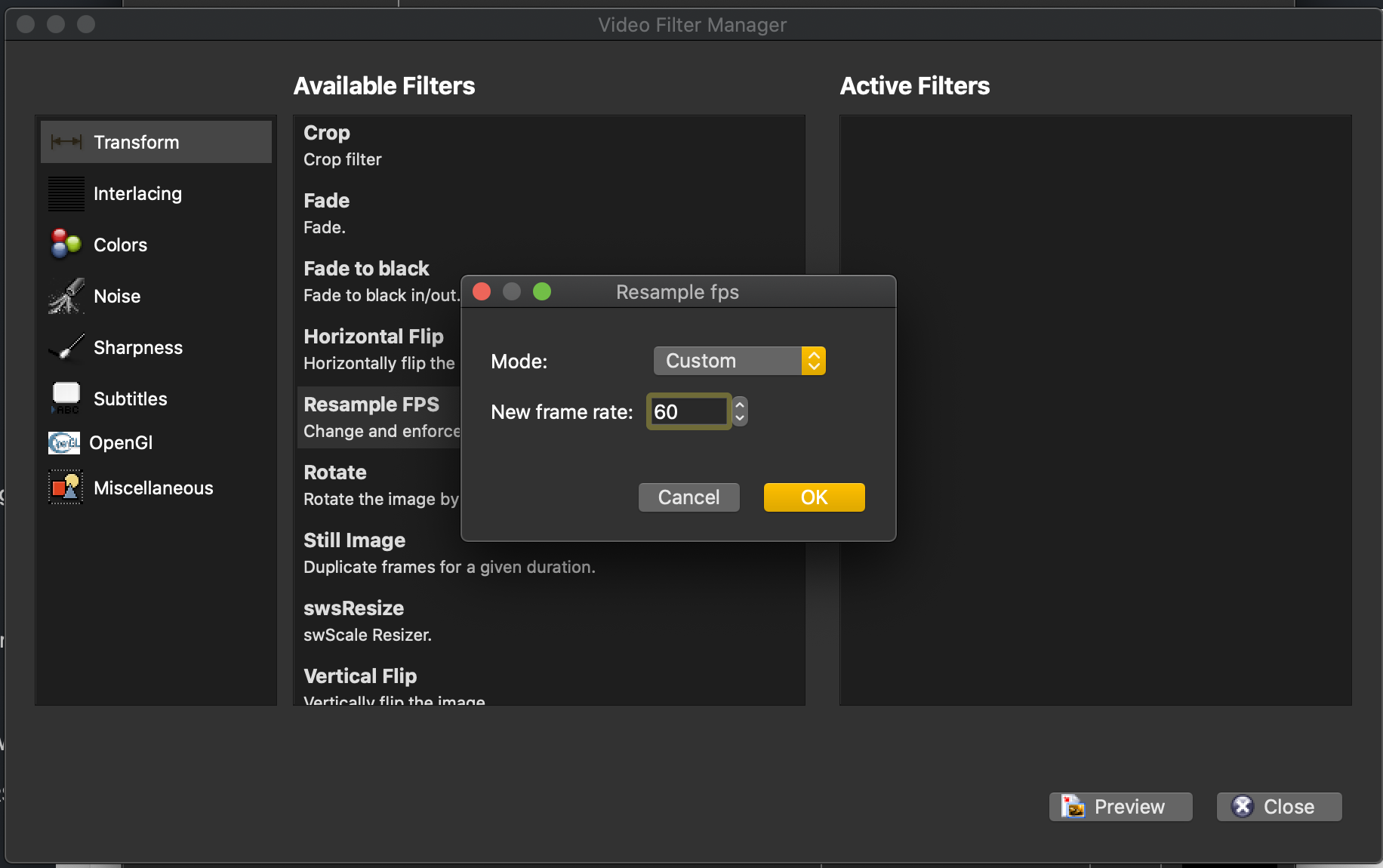 This video recorded at a variable framerate from the Quest, with an average of about 37 frames per second. To switch to a fixed framerate, type in a desired frame rate (or choose one from the dropdown box), then click “okay” then “close” 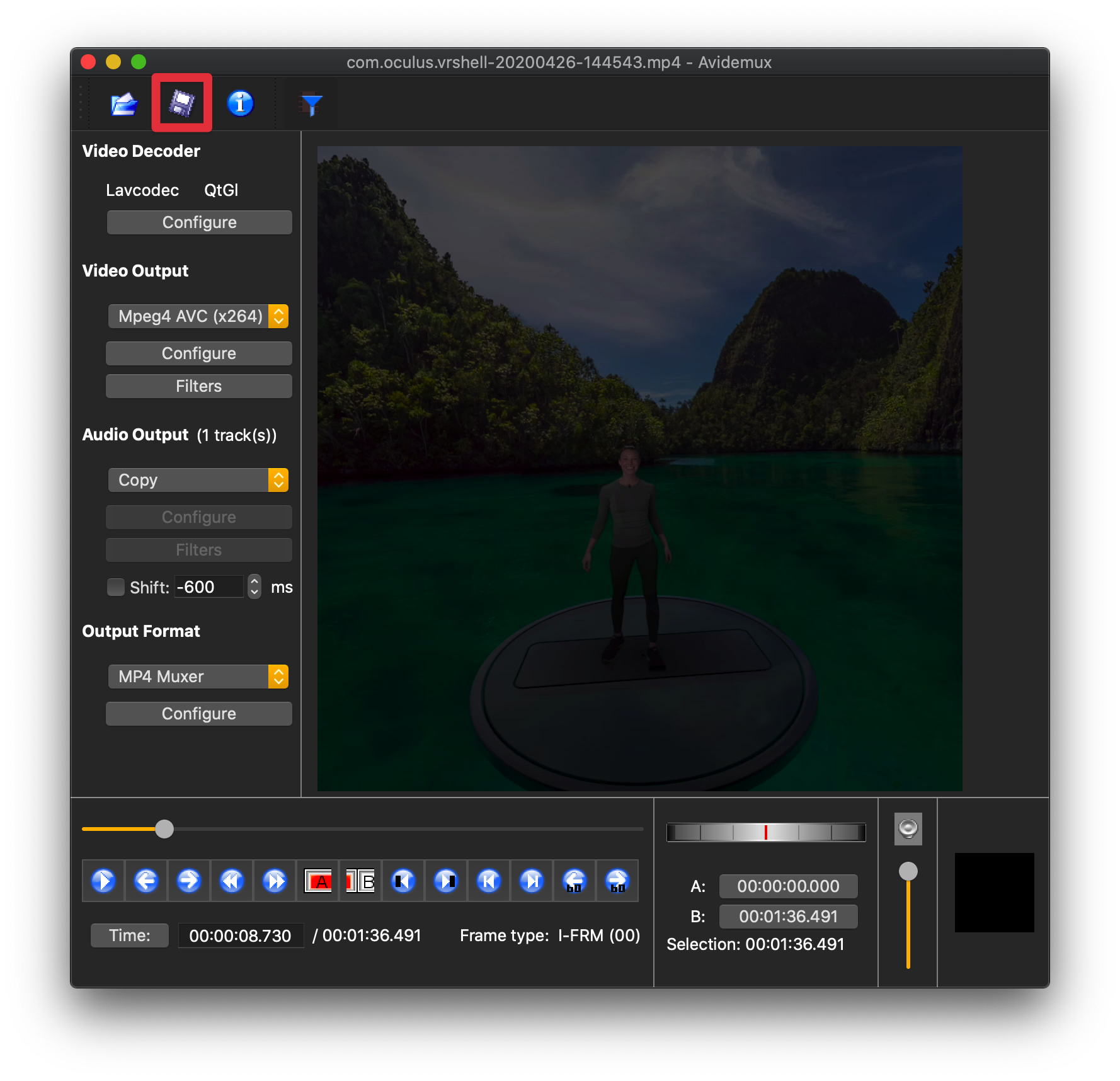 Then you can save the video like you would normally in Avidemux.

Since your PC now has to encode it, it may take a minute. 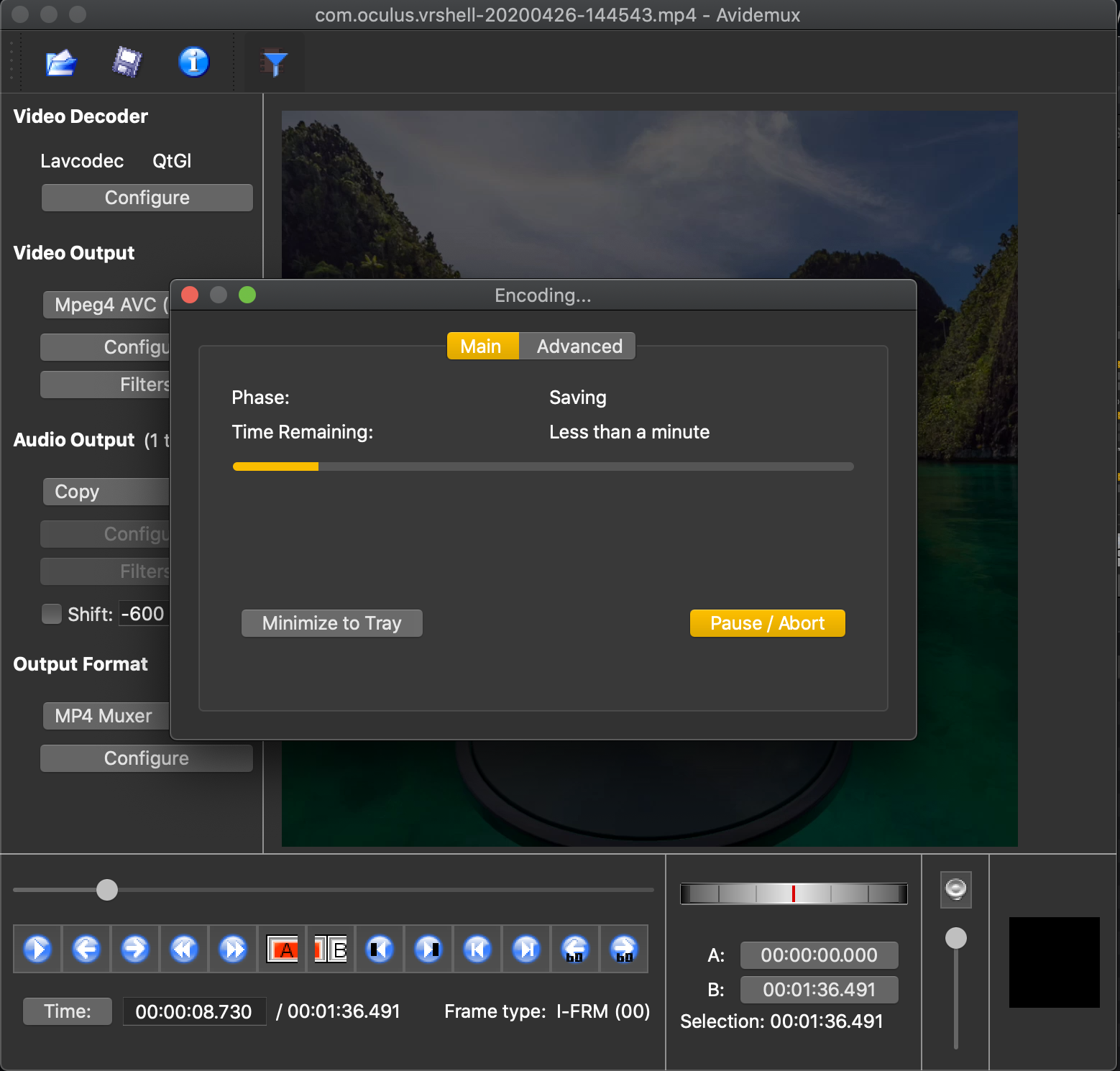 but once it’s done, you should have a fixed video!

Note: If after you re-encode it and save it, you notice the audio is still delayed a bit, you can always open the new file back up and shift the audio more without needing to re-encode it (the first tutorial in this guide).

Let us know if you have any issues or questions below!