UPDATE: BeatOn has been replaced with BMBF. Follow this tutorial to install instead:

How To Install Custom Songs On Your Quest

The Following is outdated and available only for archive purposes:

After months of blood, sweat and tears, emulamer has created a revolutionary new way of modding the Quest version of Beat Saber.

BeatOn is a beautiful new Quest app that lets you download & install new Beat Saber maps, sabers and mods without needing a computer!

How To Install BeatOn

NOTE: After installing BeatOn, you can still use SideQuest to download and organize your maps from your PC or Mac if you wish! 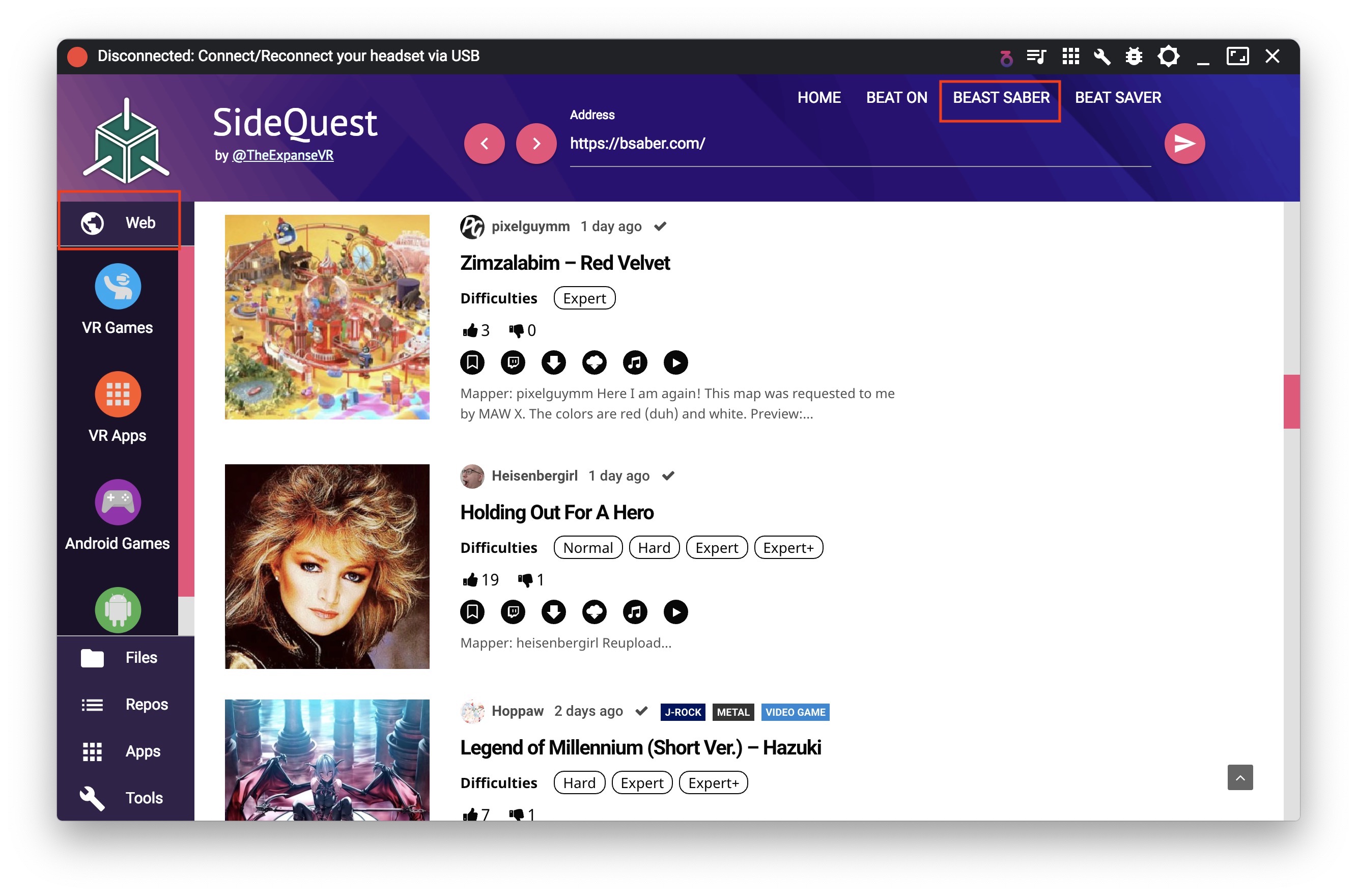 In SideQuest, when you’re ready to sync your new maps, just press the “Sync To Beat On” button instead of the “Sync Songs” (the old SideQuest mod method). 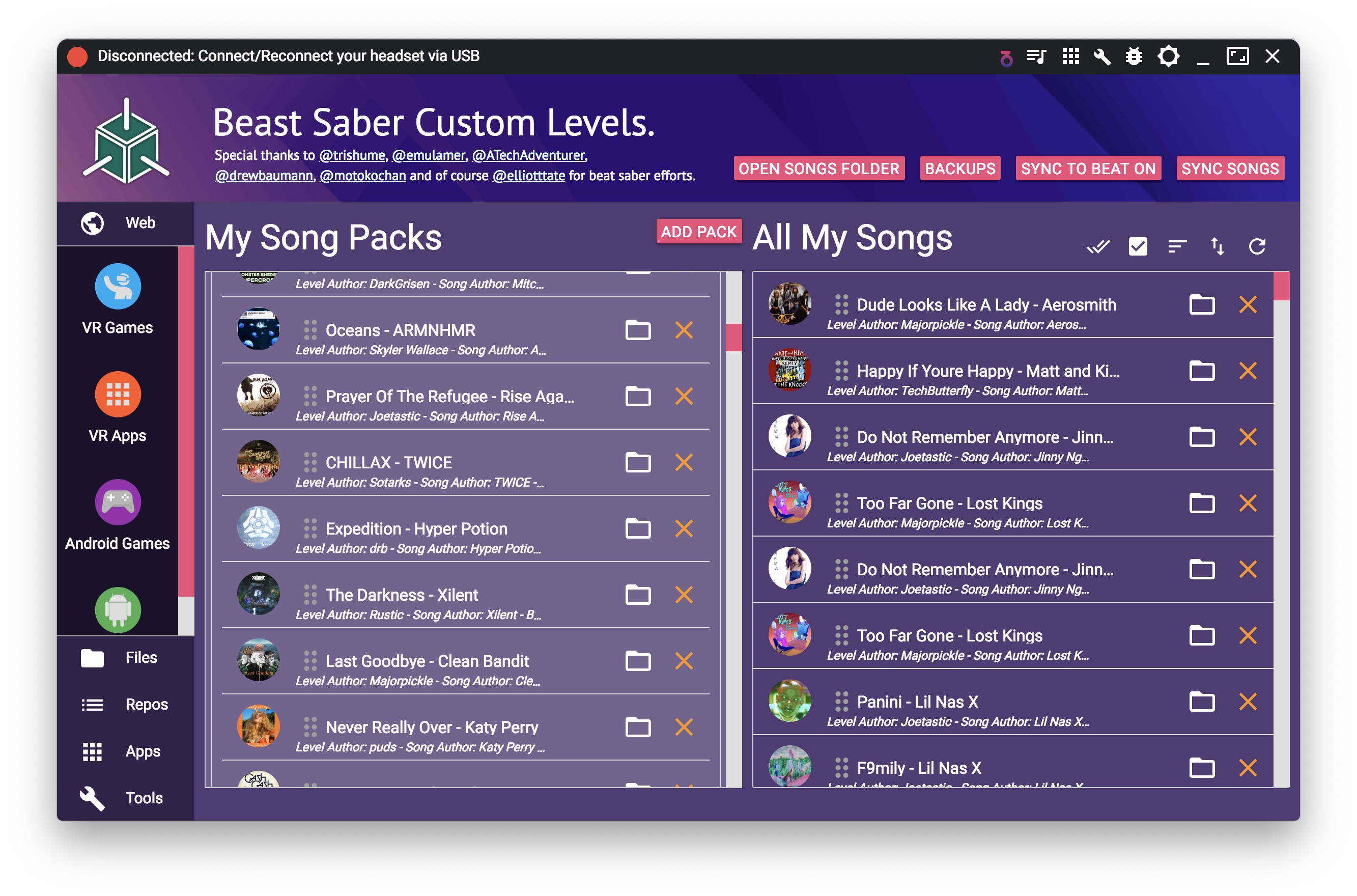 All mods can be found from within SideQuest now by clicking on the “Mods” tab on the left side.

Go here for a guide by RedBrumbler on how to make your own Saber for the Quest!

Built into BeatOn and accessible on your Quest or through SideQuest is SyncSaber.

SyncSaber is the ultimate plugin for getting amazing new Beat Saber songs to play. It allows you to:

Let us know if you have any issues! A lot more exciting things are coming to SideQuest and BeatOn soon, so stay tuned with updates this page!

Get Support In Our BSMG Discord

If you have any questions or need help, join our BSMG! We just open up a “Quest Modding” channel where you can get help.

I met emulamer soon after I started to make progress with getting a proof-of-concept for custom songs working on the Quest. He came at just the right time as I was hitting a wall. We combined what we found so far, got a proof of concept working, then he took Quest modding infinitely farther with first making the mod installer SideQuest used. Now, with BeatOn, he’s created something just short of magical.

I got a chance to tap into his brilliant mind for a short interview:

Elliotttate – Amazing job with BeatOn! I never imagined that Quest modding would get this far and especially so soon. What’s been your motivation for working this hard on BeatOn?

Emulamor – Portable Beat Saber. And what’s Beat Saber without at least custom songs? Official custom songs code being stripped from the Quest version was a bummer and I almost returned the Quest to the store. Jumped on the BSMG on Discord and there was plenty of interest so figured I’d give it a go.

I got the first mod out in rough fashion, then decided to focus on the longer term goal of getting it running entirely on the Quest… the whole idea was “portable” after all. Mods and SideQuest integration were a natural fit, so thanks to lots of people’s work, it all came together.

Very cool! Yeah, portable Beat Saber really is a magical thing. If another game didn’t come out for the Quest, I’d still be happy with it for that alone. Was this your first VR headset?

Nope, I’ve been in since the DK1, then went the Vive route, then with the Index. The Quest is my first mobile headset, I haven’t bothered with any other portable ones (gearvr, Go, cardboard, etc.) because they seemed pretty bad compared to what you get on the PC.

Yeah, sometimes I worry Google Cardboard did more harm than good because their experience with it seems to be what they think all VR is like. The 6DOF is really a game changer for portable VR. In your opinion, how do you think it compares to PC based ones?

Tracking wise in Beat Saber (probably the most demanding game), somehow it’s 85-90% as good as lighthouse tracking, I.e. plenty good up through expert plus unless you’re seriously competitive. The graphics are obviously a big step down from PC, but they are down right amazing for a $400 all-in-one headset.

The Quest as a whole is a miracle of software/hardware engineering I don’t think most people appreciate. If I could arrange it, I would buy another Quest just to get it signed by the team that designed it and put it in a display case. Amazing work by Oculus.

I hate to say it, but the Quest is the future of mass-acceptance of VR. You can get it, take it wherever and put it on your face. That’s it. No wires, no expensive PC, no wires, no mounting things to the walls, no wires, no screwing around with drivers, and it’s wireless. I really, really hope PC VR doesn’t go anywhere because it is a significantly better experience overall (other than the wires), but the Quest is more than “good enough” for almost everything.

Yeah, I totally agree. What would you like to see for the future for Quest modding?

Root on the Quest would be nice ;). More realistically, better support from game devs on mods would make things like Beat On not even necessary. For Beat Saber specifically, the likely future of mods will be through hook/code injection mods. I don’t think I’m going to be the best person for the job, but the next major step will probably be building up a framework in C to make creating or porting mods from PC easier. The holy grail would be something that can compile/inject PC mods to the IL2CPP format the Quest uses.

Yeah, that could open up some really cool doors.

One mod that I thought might be fun for the Quest version of Beat Saber would be a “Pokemon Go” type mod where you could become the “king” of actual physical locations to take advantage of the Quests portableness.

Players could battle out in front of the Washington Monument and have its own leaderboard at that spot. Is there any Quest specific mods that you think would work really well that couldn’t be done on the wired PC version?

In general, as far as mods go or even just as a game feature (to be clear, this is extremely unlikely to ever happen with a beat saber mod on the quest): party multiplayer.

PC VR in any social setting is one person playing VR and everybody else sitting around wishing they were playing VR. With the Quest, there’s no reason (aside from bodily injury) multiple people in the same general space couldn’t be part of the same game.

They’re portable enough that your friend can just bring his over and you could both play, even if it’s just synchronized score competition, instead of somebody sitting around bored.

Yeah, that would be awesome! Beat Games announced that official multiplayer is coming (and still coming when someone recently asked about it) so I really hope that makes it to the Quest version if modding it in doesn’t happen first.

How can others help with making mods for the Quest?

In order of technical difficulty: Testing and feedback, looking into what’s possible with the current asset-replacing mod format in Beat On (e.g. model making and such), see if there’s a way you can contribute to the Beat On codebase (on github at https://github.com/emulamer/BeatOn) or furthering the C hook mod efforts.

Great! How can people give back that want to support your fantastic work?

If you want to toss me a donation for the work on Beat On I have a paypal link set up here, it would be much appreciated.

In general, get people interested in VR (especially with as portable as the Quest is) and don’t pirate apps: support the game devs that are investing in VR so they keep on investing in it!

Thanks for your time and thanks for all your hard work on BeatOn! Can’t wait to see what’s next!