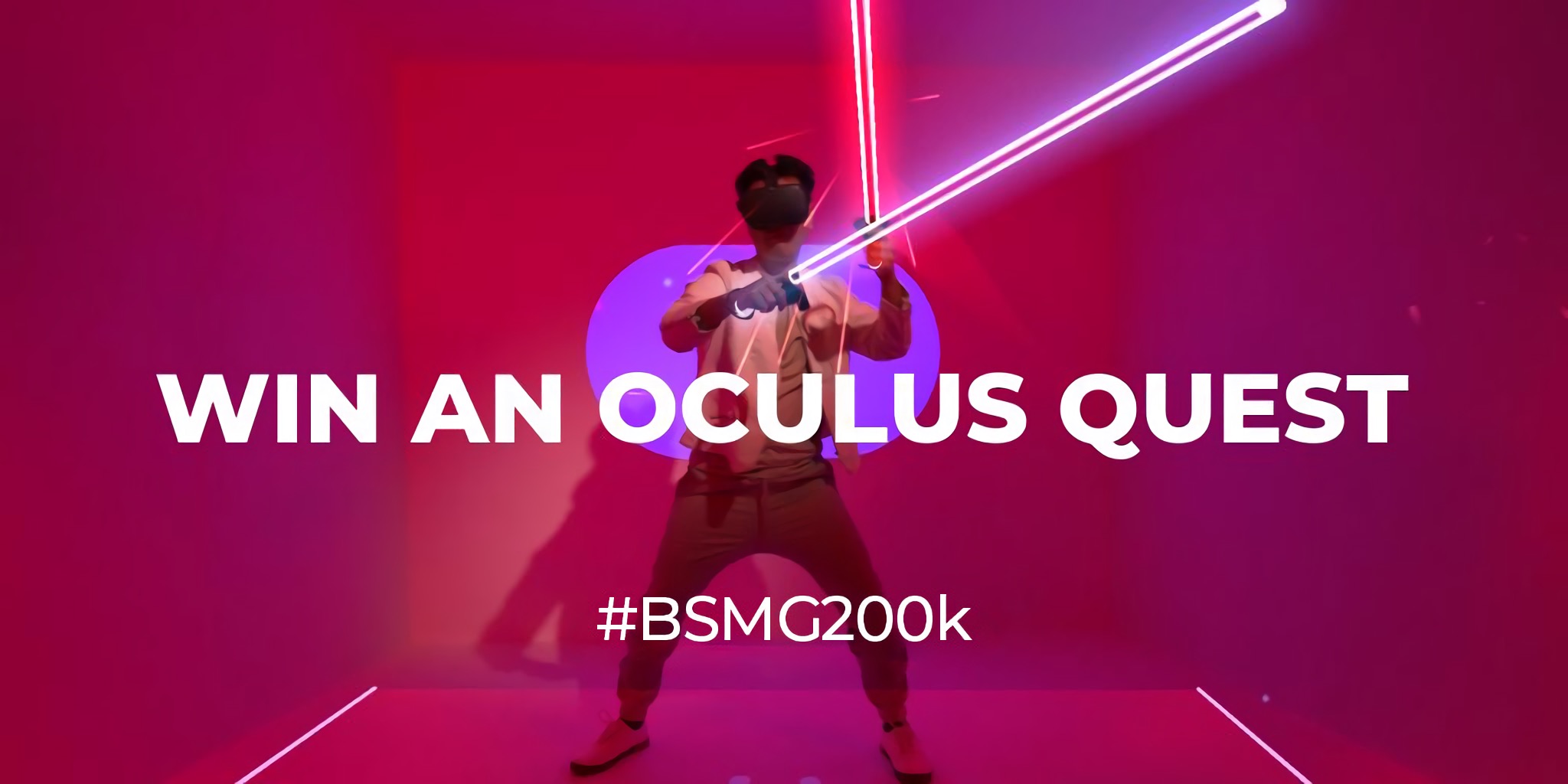 If you hadn’t noticed yet, our BSMG Discord now has over 200k members! What started as just a handful of us with the desire to expand an already amazing VR rhythm game, has now grown into one of the largest communities on Discord period (with over a million unique people visiting our websites each month).

To celebrate 200k members, we wanted to do something a bit more intimate than our last milestone, the 100k contest. We want to hear how the BSMG community (bsaber, beatsaver, BSMG Discord, etc.) has impacted you in some way. Write out your story and we’ll read them all (extra points if it makes us cry 😉 ). We’ll pick a winner who will win an Oculus Quest* (curtesy of all of our amazing Bsaber.com patroners)

Can’t wait to hear your stories! Thanks for making the BSMG such a special part of so many people’s lives! Love you! ❤️ 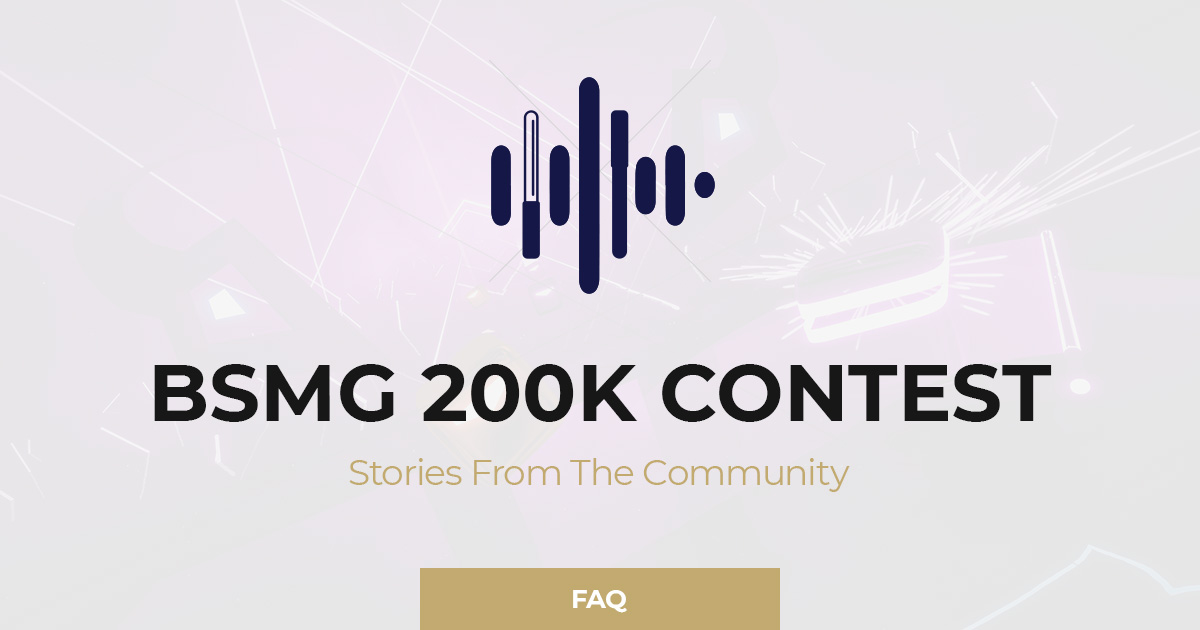 I don’t think the BSMG has impacted my life in any way. Can I still participate in the contest?

Not everyone has even stepped foot into the BSMG Discord, but r/beatsaber, bsaber.com, scoresaber.com, beatsaver.com, modelsaber.com, beatmods.com, etc. are all part of the BSMG. If you even know about this contest, there’s a good chance the BSMG has impacted you in some way. PSVR players are probably the least affected by our community, but the BSMG also worked tirelessly to promote the game initially, so the PSVR popularity was certainly impacted.

We meet people every day who’ve never joined the BSMG Discord, but played custom songs for the last year and a half and have gotten into shape, found healthy ways to deal with stress, etc. The BSMG was still impacting their lives (whether they knew it or not). That said, this contest is not for everyone. If anything, please just use it as a chance to thank the people who work tirelessly to keep Beat Saber fresh for over a million players each day.

Yes, the 100k contest was a LOT of fun. The Year One Anniversary Campaign & contest where we gave a couple thousand in prizes just a couple months ago was similar to the 100k contest in that everyone could participate. This contest is definitely a bit more low key with a less “broad appeal” to give us a chance to catch our breath before the next big contest.

We thought these stories would be really helpful for the staff that volunteer hundreds of hours helping to keep this community going without asking anything in return. There’s so many special people here that never get thanked and that’s one thing we were hoping would happen from it.

Even if you don’t feel like sharing your story, share someone else’s story. Or just say thanks to the BSMG team and everyone who has worked so hard!

I don’t use Twitter. Can I submit my entry any other way?

Unfortunately, no. We really didn’t want to have to gather the stories from multiple locations and didn’t want to chance missing some of the entries if they were say, PMed to different people. We also needed a good way of reaching people who won and have had issues in the past with that.

We have it all setup so a bot organizes every entry through Twitter. To someone who really didn’t want to make a quick temp Twitter account to enter (you can make one in just a few seconds), you can ask someone else to post the entry for you. I’m sorry that there’s not more options, but with the size of our community, it takes a huge load off the team to stick with a simple option. Thanks for helping to work with it!

I already have a Quest, should I still participate?

The prize is actually $400 in cash, not a Quest. But even if you don’t care about winning a prize, please take the time to participate. Your stories mean the world to us! If you don’t have a story to tell, but have loved playing new songs, please just say something like that!

Is there a place other than Twitter than I can read submissions?

Yes! Entries get ported from Twitter to http://gg.gg/bsmg200k in batches, so you can follow updates and read them there too.

I thought it would be fun to write and share my story, so here it is!

The first time I tried VR was just hours after one of the worst days of my life. A few hours before that first magical moment when I put on an Oculus Rift, 12 of us were in the middle of the Ocean at 3 am in the morning, treading water, watching my brother’s brand new boat sink in the distance and praying that we’d make it through the night alive. I could still make out the faint lights barely flickering underwater and I remember the moment feeling more like a bad survival game than real life. With our lifejackets attached to each other to form a circle, the 12 of us began saying prayers and singing songs to break the deafening silence, only hoping… praying that the rescue helicopter would be able to find us in that pitch black night from our 911 call. This wasn’t a game, this was real life, and it was terrifying in a way movies or games can’t quite convey.

Thankfully, the helicopter did find us eventually in that dark, salty, swirling water below and we were each lifted up in a small bucket to safety. Hours later, in the safe nook that is my brother’s house, I was raw, numb and couldn’t sleep despite being utterly exhausted. I had just gone through an experience that I couldn’t shake. It was then while everyone in the house was asleep that I began looking around for distractions and stumbled upon my brother’s Oculus Rift. As I put it on, I remember being surprised and a bit blown away by a strong shift happening to my current state of mind. Instead of feeling empty and hollow like before, I was teleported to a new world in VR and my current nightmare seemed a bit farther away. THIS was powerful! I expected VR to be cool, but I hadn’t expected it to have the ability to alter my state of mind in such a drastic way like this. In the weeks that followed, I began saving up to buy an Oculus Rift. When I got one, the experiences were powerful, but often short and couldn’t consistently be played over again to have the same effects as with my first playthrough. It wasn’t until Beat Saber came out that my life really began to change.

Even without near-death experiences, my life has consisted of some unique challenges that I battle with every day. Looking back at the past year though, I can honestly say Beat Saber has been the most powerful “tool” I’ve ever found to help battle these challenges.

A little about me that I don’t share with a lot of people, I have something called Fibromyalgia. It’s a bit complicated, but at the end of the day, it means that I simply hurt all the time. The best analogy to compare it to is kinda like having the flu, except that achiness, exhaustion and desire to just lie down and hope for sleep never goes away. Because of the limitations I battle with, a strong dose of depression has come bundled with it.

The day Beat Saber came out, I immediately bought it. Being a musician and huge music lover, I already knew how music can be one of the most powerful things on this earth. Coupled with VR’s ability to “teleport you to a different place and state,” Beat Saber was and is non-other than purely magical. It allowed you not only to listen and visualize music in a new way, but also to be “in” the music — to be a “part” of music in a new way.

When you have “flu-like symptoms,” exercising isn’t exactly your first “activity choice” even though a moderate amount can be very helpful for Fibromyalgia — not only to increase physical health (reduce pain, etc.), but for mental health also. The first time I played Beat Saber, two hours went by like they were two minutes, I had an amazing workout, an incredible amount of fun and my state of mind was completely in a different place than it was before. This game somehow managed to combine the best aspects of VR with the best aspects and power of music and the results were a game changer!

Being an early access game, I remember being a bit nervous. On one hand, I had come across something truly powerful and effective, but on the other, the game’s limited initial content might not last long term for me. Could this be something that could be life changing long term? What if I grew tired of the content and the game would stop being as effective as it was? It was then that I began looking into modding the game. After getting an initial proof of concept working, I came across a couple of other people online that had done similar things. We gathered in Discord and formed what’s now known as the Beat Saber Modding Group (BSMG).

Our group started very small, but I immediately began work to change that, knowing that we’d need a lot of people working together to ever produce a steady stream of new content. Coming from a marketing background, I began laying out a plan to strategically market the BSMG like I would for any other business. Many of the strategies proved very successful. Today, we are have over 200,000 members in the BSMG Discord (one of the largest Discords period) and are getting around a million unique visitors on our websites (bsaber.com being the main one that I built as a platform to further strengthen and grow the community).